skip to main | skip to sidebar

Chidley did not enter public life until the late age of 51 years, just over two years after Ada’s death. His autobiography reveals his interest in the issues of sex, dress and diet to have been longstanding. His manuscripts which are held in the Mitchell Library include correspondence between himself and the English writer Havelock Ellis as early as 1900. It appears that it was Ada’s death that propelled Chidley into public life at least in part as a means of dealing with his own grief. In a letter to Havelock Ellis several weeks after Ada’s death Chidley hinted at his forthcoming mission:

“Poor Ada died – demented – in the hospital on the first of this month. She had been living with me for the last 2 years – part of myself has gone – and that I have failed as far as she and I are concerned. It is only the thought of others that keeps me alive now”.

After numerous unsuccessful attempts at obtaining a publisher for his philosophical essay “The Answer”, Chidley self-financed the first edition of his work. With copies of “The Answer” for sale Chidley entered the public domain to publicize it. His entrée into public life occurred at Melbourne and was favourably received by the Melbourne Herald in March 1911. The story described Chidley as a “tall, well built man, about 50, with the bronzed limbs of a surf bather”, dressed in a neck to knee bathing costume. The article quoted Chidley on the health benefits of his form of clothing and reflected on the attentions of the crowds to this “bronzed stranger”. The Herald stated that Chidley “was not a lunatic, but a scholar and philosopher, who had the courage of his convictions”.

With the assistance of H. H. Champion, an Englishman famous for his trade union activities, Chidley had the first edition of “The Answer” placed in several bookstores including Coles Book Arcade. Wanting further publicity for his cause Chidley ventured to Sydney in May 1911 and appeared in his bathing garb in the Sydney Domain. With relatively few takers for his essay he began parading the streets of Sydney in a bathing costume with a sandwich board upon his back publicizing “The Answer”.

It was only a matter of days before Chidley accumulated the first of nearly thirty (30) criminal convictions. Charged with behaving in an offensive manner in George Street, Chidley was fined 5/- and the book forwarded to the Crown Law Authorities. Chidley informed the Magistrate, Mr Smither, that “People will eventually discard a lot of the clothing now worn. They ought to live to 130 years”.

Chidley returned to Melbourne shortly thereafter and soon experienced difficulties with the Victoria Police. On 25 September 1911 Detective Burvelet attended Chidley’s home and confiscated seven copies of “The Answer”. Upon visiting Coles Bookshop two copies were bought, together with a further two purchased from H. H. Champion. Champion, Cole and Chidley were summonsed to the Melbourne District Court on 8 October 1911, and whilst Cole pleaded guilty to having the offensive literature, Champion and Chidley were defended by counsel, Maurice Blackman. Chidley was fined 5 guineas and the books were impounded and destroyed.
Posted by Vivien Fleming at 4:36 AM No comments:

In summing up, His Honour the Chief Justice, found that the evidence was strongly in favour of the defendants.

After his release from prison, Chidley joined the newly established Byron Theatre Company, an Adelaide theatre group and met a young actress, Ada Grantleigh. Although Chidley initially rejected Ada’s advances, the couple soon formed a de facto relationship with lasted 25 years until Ada’s death from kidney failure, precipitated by chronic alcoholism, on 1 December 1908. Ada was aged 48 at the time of her death. Throughout their relationship Ada remained legally married to Walter Thoms, a violent man whom she wed at age 18 and separated from soon after. She had adopted the name of Grantleigh from a theatre proprietor whom she had befriended shortly after her separation from Thoms.

Chidley and Ada’s relationship was marred intermittently by violence and alcoholism, on both sides. They separated on innumerable occasions, sometimes for up to two years. The couple moved frequently and lived in Adelaide, Melbourne, Sydney, and Wellington, New Zealand, although during times of separation Ada returned to her home town of Adelaide. In 1891, around nine months after one of their many separations, Ada gave birth to a child whom she named Donald William Chidley. Chidley had remained in Sydney and when the child was aged one the couple reconciled. Until Donald was nine years old Chidley thought the child to be his natural son. Ada’s natural child, of whom Chidley was indeed the father, had however been still born, and as was common during that period, Ada left hospital with a child whose mother had died in child birth. During Chidley’s subsequent public life between 1911 and 1916 he made few references to his late de facto wife. On those occasions when he did, Ada was not named and referred to in such a manner as to suggest that the couple had been legally married. Similarly he made no reference to his adopted son, Donald, and on admission forms during his four asylum incarcerations stated that he had no children. The numerous public attacks on Chidley together with the general societal perceptions of morality during that period would suggest that Chidley considered it in his best interests not to reveal his own breaches of societal mores.

Donald had remained in New Zealand after one of the couple’s separations and subsequently joined the Seventh Wellington West Coast Company First Wellington Battalion, New Zealand Expeditionary Force, with whom he served in France. Sally McInerney in her introduction to Chidley’s Autobiography, Confessions, published in 1977 incorrectly states that “Donald was killed in the First World War, serving in the AIF”. Donald died on 17 May 1926 at Auckland Hospital, New Zealand, from carcinoma of the stomach. His death certificate notes his parents as being William James Chidley and Ada Chidley, and him to have been resident in New Zealand for 22 years. He died aged 25 years and left a widow aged 33 and four (4) living children, three girls aged 7, 6 and 3, and a boy aged four (4) months.
Posted by Vivien Fleming at 4:00 AM No comments: 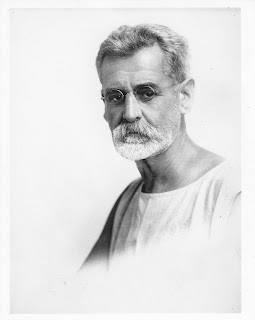 Posted by Vivien Fleming at 7:59 AM No comments:

William James Chidley was born in Melbourne in 1860. He was one of five children adopted by English immigrants, who after a period in the Victorian goldfields, settled in Melbourne. He returned to England with his parents at an early age and whilst there his father engaged in the book trade, albeit unsuccessfully. The family returned to Australia when Chidley was five. Upon his return the family moved itinerantly throughout Victoria, with his father operating a transportable photographic studio. At times Chidley remained in Melbourne, boarding at School where he completed his education to age 13 at St. Kilda College. After assisting his father for a period in his photographic studios and working for a solicitor, Chidley was articled as an architect for four years. He found this “too dry” and engage in the profession of an itinerant crayon and water colour artist, drawing portraits for up to £10 each.

Chidley was working in Adelaide in October 1882 when he, together with his canvasser Arthur Edward Saddler, was involved in a street fight. The events ensuing were to have a profound effect on both Chidley and the future formulation of his philosophies. Chidley and Saddler had hired a horse-drawn cab at around 11.45 pm on the Monday night, 2 October, to take them to Waymouth Street. Shortly after the commencement of their journey they noticed an altercation between two people unknown to them, Thomas Maloney and Mary Ann Hewitt, and asked the cab to stop. Saddler embarked from the cab and began to defend the woman by fighting with Maloney. After a short time he called for Chidley’s assistance. Chidley and Saddler then tackled the man to the ground, after which Maloney retreated to the middle of the road and commenced throwing stones at the pair. Another man, apparently a friend of the women, then commenced fighting with Maloney, who collapsed and subsequently died after several days in hospital.

Chidley and Saddler were arrested at Bridgewater on 18 October 1882 and charged with the murder of Maloney. They had evaded the warrants for their arrest for several weeks and were remanded in custody to appear at the City Coroner’s Court. Before a coroner’s jury on 23 October 1882 a committal verdict of guilty of manslaughter was returned. Chidley and Saddler were remanded in custody and committed to trail before the next Supreme Court sittings.

At the Supreme Court trial on Thursday 7 December 1882 the jury returned a verdict of not guilty to the charges of manslaughter against Chidley and Saddler. The evidence adduced at the trial was that the deceased died on 12 October from inflammation of the membranes of the brain, the consequence of skull injuries sustained from a “fall on to the rail or stone, but not a blow from a fist or an ordinary boot”. The evidence suggested that an unknown man had been fighting against the deceased prior to his collapse onto the newly laid tram tracks.
Posted by Vivien Fleming at 7:20 AM 2 comments: 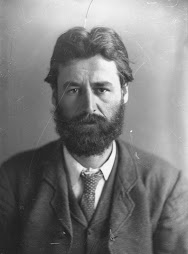 An early photo of Chidley